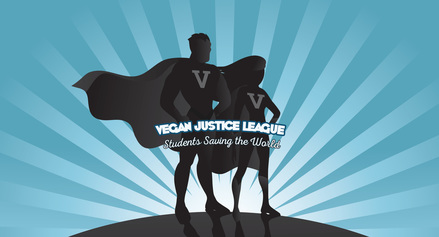 The world is broken. It’s going to take some brave superheroes to step up and put it back together.

Vegan choices help fight climate change, conserve land, save forests, feed the hungry, protect the oceans, stop animal cruelty, and save billions and billions of lives. That’s what VJL is all about. We’re out to save the world!

What is Vegan Justice League (VJL)?
VJL is a network of student-run vegan advocacy groups. We use positive outreach to inspire people to make vegan choices. We also help expand vegan food availability on campuses and in the surrounding communities. Each VJL group is run independently by the students on their campus.

Who Can Join VJL?
EVERYONE is welcome at VJL, even if you’re not yet vegan. In fact, VJL is a great place to meet others who are new to making vegan choices.  Come help us save the world! See Why Vegan for more about who is joining and why.  And find a VJL near you.

VJL’s Approach
1. Be kind to people. Be kind to other people and invite them onto the vegan path.
2. Be kind to animals. Offer and promote only vegan items.
3. Use POSITIVE outreach. Invite, befriend, persuade. Don’t yell in anger, scold, or intimidate. Negative outreach (yelling in anger, fighting, coercing, bullying, intimidating, name-calling, etc.) does not effectively build community and is not condoned by VJL.

Why Positive Outreach?
We've worked hard to study the quirks of human psychology (and there are lots!). Here are some key reasons VJL uses positive outreach instead of protests, bullhorn events, shock tactics, etc.)

Examples of Positive Outreach
There are hundreds of ways to do positive outreach. Learn more by getting involved in VJL. A few examples include:
Thank you for all you do to make the world a better, more compassionate place!